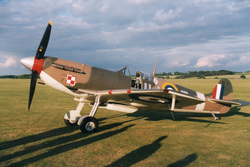 Supermarine Spitfire MKVb - BM597 at Middle Wallop
During the 1980's and early 90's I spent many hours at airfields and airshows in the UK. During this time I used a Minolta X700 35mm film camera. The results of this was boxes full of 35mm prints which have lived in various parts of my house notably the garden shed. I recently thought it was time to have a look through some of the shots and then I realised many of the aircraft I had taken photographs of no longer exist.


Also some of the airfields have also disappeared into the history books. So it was time to buy a scanner and spend many hours uploading the shots so that they could be displayed on the web. This is the end result of that work. My original scanned shot website was hosted by Fotopic until they went into liquidation in March 2011. This site is to replace the one lost following the demise of Fotopic. Now I know the shots are not up to digital quality but I think they provide a record of a bygone age.

I hope the shots may revive some memories to those who were there and equally for those too young to remember, what you missed. The world of aviation is very different these days with far less variety with regards to aircraft types. However, the memories of the old days, for me, remain. Standing at Boscombe Down watching Lightning XS422 hurtling down the runway into a zoom climb - classic.

​I also have a digital photography aviation website which can be found here - www.airshowspresent.com

In June 2013 I took ownership of Lightning T.5 XS420. If you have an interest in Lightnings please have a look here - www.xs420.com

This website is dedicated to the memory of my Dad, Edward (Eddie), my Mum, Vera and my Brother Chris. ​
Aircraft and Airshows Past
All Photographs By Richard Hall
All Images Copyright Richard Hall
No images may be reproduced without prior written permission
a1ec006076ef4cefa53894580c0e9d1d